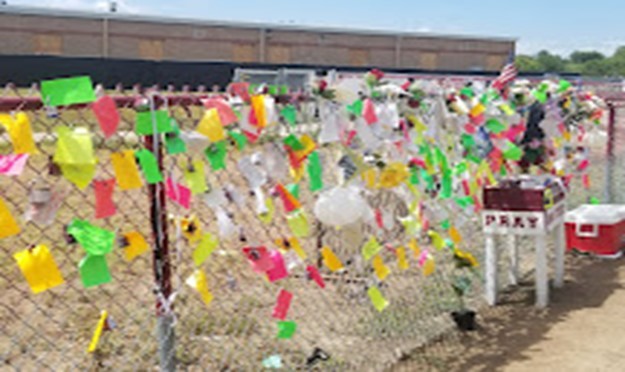 Sallie can laugh and drink margaritas till the cows come home. She also cares deeply about Gospel and Jesus and the people who Jesus loves. She wrote her reflections about the aftermath of the slaughter In Uvalde; I asked her if I could share them with you; she said yes. The piece below is long but worthwhile. I commend it to you, especially her reflections at the end. 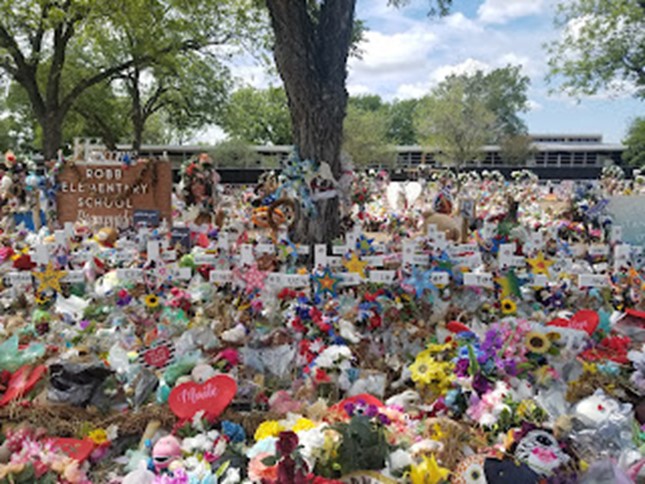 In ten days, it will be three months since the massacre at Robb Elementary in Uvalde. I had wanted to write about this tragedy after my second visit, but the grief was so deep that the words would not come.  But today, August 14, I went for a third time in order to preach for the saints of First Presbyterian in Uvalde. Now I think I can better process what has happened from my point of view. Let me start at the beginning.

Almost three months ago, a carful of us from the Presbytery went to attend a hastily-planned prayer service for the community at First Presbyterian, about 48 hours after the massacre. As we got closer to town, we noticed that we were following a couple of hearses going in the same direction. We had brought along with us boxes of soft, colorful prayer shawls lovingly prepared by women in two of our congregations. We also brought the promise of financial and spiritual support from Presbyterian Disaster Assistance. And we brought our physical selves, to offer a ministry of presence and walk alongside all those who were grieving. Which included us.

Because of all the media trucks and reporters in town, there was no internet at the church. We were not able to produce printed bulletins for the service. So we all punted as best we could. And when my turn came to offer a reading from the Psalms, I invited the congregation to repeat after me, and we "lined it out" as they did back in the early days of the church. (thank you Prescott Williams for teaching me that long ago!) The service was a blessing, even to those of us who were visitors, but it's safe to say that we were all still stunned and shell-shocked. It just did not seem real.

We drove home down Highway 90 toward San Antonio, a much more solemn group than we had been earlier that day. As we drove through Hondo, about 30-40 minutes east of Uvalde, we passed by a church where about 20 people were standing in front with posters and lit candles and flashlights, crying and singing, offering their prayers for the people of Uvalde and urging all the passersby to do the same.

About a week later, the funeral home visitations and funerals began to happen. They could not happen immediately because of the need for autopsies and the wait for the bodies to be released to family members. When the time came, everyone in this close-knit community wanted to go to all of the visitations and all of the funerals for all of the victims - and so the services were strung out over a period of about two weeks.

One of our pastors and I attended one of the first visitations, for a girl who was related to a colleague of ours. The girl and her cousin were both in that classroom that day. This is when the magnitude of the tragedy began to become real for me.

The funeral home parking lot was full, cars lined the main street and side streets. Dozens of people milled around outside. The visitation was scheduled to go on for about 3 hours. My friend and I walked together down the aisle of the large darkened funeral home chapel. There had to be 50-75 people there. Some of the family were seated together at the front, nearest the casket, while a video of photos and music played overhead. The other people had surely spoken to the family already. but everyone just wanted to stay there together.

The casket was open. I could not believe it. I had no way to predict what we would find. But we had to go by the casket to pay our respects. And there we saw a beautiful young girl in repose, with no visible indication of what she had endured. The makeup artists of the funeral home had given this girl's parents the gift of at least being able to see their daughter look peaceful, regardless of the circumstances of her death. My tears began to flow.

After we were able to collect ourselves, my friend and I decided to go up the two blocks to the town square and see what was taking place there. And there was a lot. I hadn't taken more than three steps onto the square when a young man came up and pressed a wooden homemade cross into my hand. (I still have it in my car) People were shoulder to shoulder - strolling, grieving, making chalk drawings on the sidewalk, bringing therapy dogs around to visit with whoever needed them. Media tents were still everywhere. All of a sudden, I noticed that mariachi had begun to assemble on the north side of the square. Dozens of them. I wasn't the only one who noticed. We learned later, thanks to this article in the New York Times, that they had come by bus from San Antonio to offer this gift. It was some of the richest, most beautiful music I've ever heard. We decided to step away so that others could get close to the music. And just as we were starting to cross the street, we heard the entire crowd singing with the mariachi, in four-part harmony. It was stunning.

Those memories were still in my heart almost three months later, when I returned to preach at First Presbyterian.

As I got close to Uvalde, I thankfully did not follow any hearses into town as I did the last two times. Both the homemade tributes of stuffed animals and flowers, and the crowds which brought them, had greatly diminished around the town square. There were a couple of mourners strolling among the tributes. But this time, there were no news trucks. No teams of therapy dogs. No motor home from the Billy Graham Evangelistic Association. No obvious police. No gawkers.

The members of First Presbyterian are doing fine, but the pain and grief are still palpable. The granddaughter of one of their members was in the classroom that day. In a town this size, everyone knows everyone. Everyone went to high school together, and those who went to college have returned to teach or to work in other professions. And now their children are all in school together. This means that everyone knows Police Chief Arredondo, who as of this day is still on leave from the school police force. Everyone also knows the doctor who testified about gun safety before Congress. A terrible situation has been made massively more terrible by all of the interconnected relationships among the residents. Even around the coffee pot before worship, I heard one member ask another, "Did you go to the school board meeting?" It's inescapable.

After worship, I decided to drive by Robb Elementary. It is further out near the edge of town. 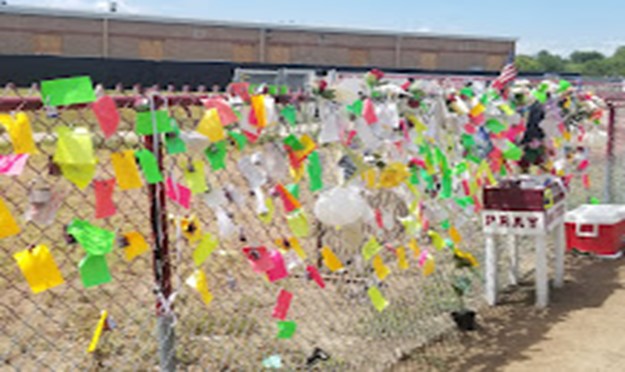 Here the tributes cover the school grounds, as you can see above. There were multiple memorials for each of the children and the two teachers, plus the one teacher's spouse who died the next day of a heart attack. Posters were lining the fences. Toward the end of the fence, there was a place where one could use paper clips and
brightly-colored notes to make a prayer wall that fluttered in the breeze. One Texas state trooper was parked near the school's drive; I suppose to help keep order. But no one there was "out of order." Probably 25 people were there, around noon on a Sunday, to quietly view the tributes. As I walked down toward the prayer wall, one gentleman said to me, "The school's not that big." I said to him "Yes, and the grief is huge." After a brief visit, I got in the car and came home to San Antonio.

So. What is one to make of all this? What have I learned?

There is still so much more to come. Arredondo's situation should be settled in the next week. The principal of Robb Elementary has been transferred to another program in the school district. Lawsuits are flying left and right. Significant money is flowing into the town without a lot of direction as to how it should be spent. There was an offer to tear down and rebuild Robb, but as of today it's still standing - and the surviving students are going to begin the new school year in another school. For now, though, we pray and take things a day at a time until some resolution of some kind is reached.